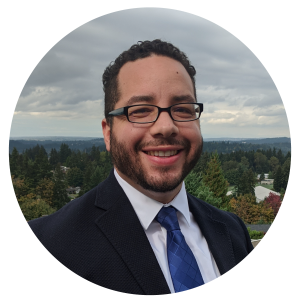 Javier is the Director of Development at Bellevue College. Before, Javier served in various non-profit and public positions including teaching, human resources, administration, and now fundraising primarily in education. He’s been in development the past seven years starting as a one-person shop before moving into major gifts.

Equity and identity are important to Javier and he’s led/facilitated various workshops. His interests include making the work of development more equitable, and he’s co-led policy work and workshops on race, and harassment.

He’s a former Advancement Northwest mentee, learning under the Holy Unicorn, Michelle Johnson. Now he’s a mentor trying not to disillusion fundraisers about troublesome funders, events, and the Seahawks. At home, Javier tries to avoid eating fast food with his family and dog in Renton.

Return to Board of Directors Page